Uplifting the plight of detainees to the highest UN stakeholders

In July 2020, Crisis Action put families of unjustly detained human rights defenders in contact with the UN Special Envoy for Syria, Geir Pedersen. We assisted in creating a Core Coalition of Detainee Groups (FFF, Ta’aafi, Caesar Families Association and the Saydnaya Prison Group), and opened a direct line of communication from the Coalition to the Envoy, to ensure a constant flow of information about the fate and whereabouts of unjustly detained individuals. Crisis Action also supported Wafa Mustafa’s briefing to the UN Security Council. She demanded unilateral releases of unjustly detained and immediate medical access to prisons amidst the exponential rise of COVID-19 cases in Syria.

In parallel, Crisis Action has been helping partners to work with Germany on a first-ever UN Security Council Statement on Syria’s missing and unjustly detained.

Changing the narrative of war inside Russia

In July, Crisis Action facilitated the first ever screening of the powerful Cannes-award winning ‘For Sama’ documentary in Russia. The documentary was screened by the Voronezh House for Human Rights. The event was followed by a discussion with Waad al-Katib and a Q&A with two Russian activists, Victoria Gromova and Aleksandr Gorbachev.

Crisis Action supported Mohammad Abo Hilal, to send a letter directly to Russian president Vladimir Putin. The letter was uploaded to the Russian Presidential Administration’s website and was directly addressed to Putin. We supported Mohammad Abo Hilal ensure the letter was covered by Russian Independent media Novaya Gazeta and was then shared by a number of Russian CSOs including Civic Assistance Committee, Soldiers Mothers of St Petersburg, Moscow Helsinki Group, as well as by Amnesty International Syria. Additionally a group of antiwar activists in Russia, “Lights of Eirene”, shared the letter on their Facebook page. We worked to enable several media outlets to report on the story as a part of a comprehensive reporting on the plea of Syrian detainees such as Radio France International, The New Arab, Al Jazeera and Al-Modon. 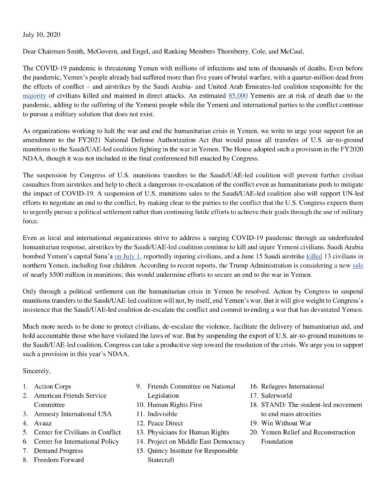 As Saudi airstrikes targeting Yemeni civilians mounted in July, we supported 20 NGO partners in publicizing a letter calling  for the suspension of US bomb sales to Saudi Arabia and the Emirates, and organized a collaborative Twitter thread among partners to this end. Despite the failure by the US House of Representatives to include this arms suspension in the annual defense authorization bill, NGOs succeeded in pressing for its inclusion in the annual State Department appropriations bill passed by the House on 23 July.

On 7 July, we helped French partners coordinate a statement between 11 international and Yemeni humanitarian and human rights partners criticizing the French government’s decision to hold a vital parliamentary hearing on its annual arms export policy report behind closed doors.

On 11 June, Crisis Action facilitated an online press briefing for Sahelian partners to amplify their reach ahead of the launch of the International Coalition for the Sahel. Sahelian civil society’s message was simple: increased attacks on civilians in the region showed that the current security approach is failing. They committed to forming a “People’s Coalition” to push governments to prioritise the protection of civilians. The press briefing was attended by influential journalists covering the Sahel (New York Times, Reuters, AFP, RFI among others). It also helped shape the coverage of the government-led Coalition: most stories about the government coalition mentioned civil society’s concerns. 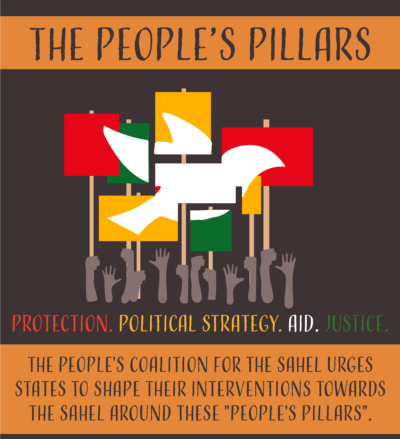 Civil Society launches “The People’s Coalition for the Sahel”

On 16 July, Crisis Action helped Sahelian and international partners launch the first-ever People’s Coalition for the Sahel. This initiative brings together an initial group of 20 Sahelian organisations and 15 international NGOs in a shared vision for people-centred responses to the crisis in the Sahel. During the launch event, partners presented the People’s Pillars – expressing this vision. The launch was watched by nearly 3000 people around the world, including a significant number of key policymakers and journalists. News of the launch was broadcast to additional audiences by an impressive media splash in Le Monde, Deutsche Welle, RTBF, RFI, VOA, Atlasinfo via AFP and BBC.

You can read the previous bi-monthly update here.