Despite increases in attacks that violate the March 2020 ceasefire, and a marked increase in COVID-19 cases across Syria, there have also been positive developments around civilian protection, including the Netherlands announcement to pursue accountability for gross human rights violations under the UN Convention against Torture. This is an important step that could lead to proceedings before the International Court of Justice. During this period, Crisis Action continued to build its work on influencing Russia by engaging with Russian civil society, broadening our engagement with independent Russian media outlets, and finalising the report on human rights violations in Syria by Russian partners. 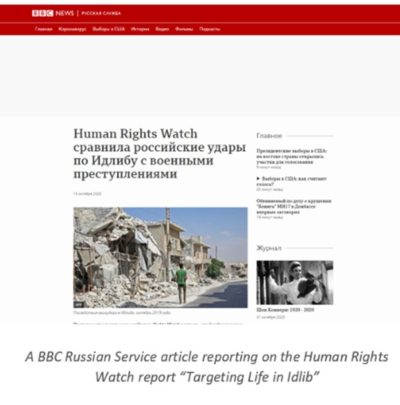 Crisis Action spurred impressive media coverage in Russia, on the role Russia has played in the killing of 1,600 civilians, the destruction of infrastructure and the suffering brought to Syrians forced to flee their homes. Crisis Action supported Human Rights Watch to amplify their new report “Targeting Life in Idlib”, published on 15 October. The report investigates 46 air and ground attacks by Russian and Syrian armed forces and pinpoints Russian individuals responsible for the war crimes committed in Syria. Some of the media pieces included a critical article and interview in Svoboba, a piece on the popular news site RosBalt, also in FinAm, and the regional news site the Real-Vin, and in-depth coverage on the BBC Russian Service. For some of these media outlets, it was their first time ever to cover stories on the role of Russia in Syria.

In October, Crisis Action facilitated a training for 35 Syrian partners and activists on “Advocacy at the UN Human Rights Council and within the UN System.” This was the first of a series of capacity-building sessions we will be providing, following requests by Syrian partners to help strengthen their advocacy capacity in various areas. The session helped participants better understand the UN’s international human rights mechanisms and processes, and helped partners learn ways to most effectively engage them. One of the participants said “it was a super session and very needed, many thanks for organizing and looking forward to the next session.”

We are working with the Moscow Helsinki Group to organise a virtual “Solidarity Talk” between Syrian, Russian and Ukrainian partners to explore ways to further pressure Russia/Syria to release innocent detainees. We will also be delivering more capacity-building trainings that our Syrian partners indicated would be important for them. We are supporting the finalization and launch of the report by Russian human rights defenders on violations by all actors in Syria, including Russia.