In this month’s update…the latest from our core campaigns on The Sahel, Yemen and Syria; news from our work targeting China to help sustain peace in South Sudan; and details of our emergency response campaigns on Myanmar, Mozambique and Israeli-occupied Palestinian territories. 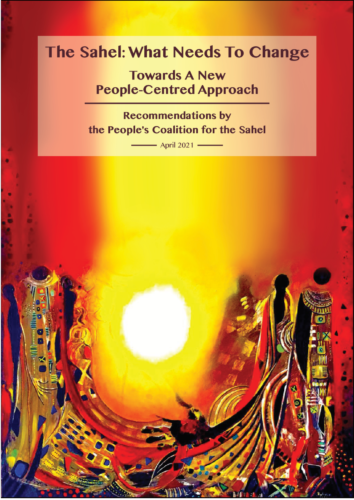 Crisis Action supported the production and launch of ‘The Sahel: what needs to change’ – a landmark report from the People’s Coalition for the Sahel, endorsed by 48 civil society organizations, that provides concrete proposals for how governments must better protect civilians across the region.

Members of the People’s Coalition gathered in Bamako, Mali and Ouagadougou, Burkina Faso for a series of strategy workshops – designed and coordinated by Crisis Action – to develop plans for engaging political leaders and policymakers across the region and advancing coalition recommendations with national authorities.

The workshops strengthened collaboration and skill-sharing between members of the Coalition, and identified a number of tangible opportunities and ideas to engage national authorities and other decision-makers judged key to influencing national policy. We are developing plans for a third workshop in Niamey, Niger.

Underscoring the increase in attacks by armed groups against civilian populations, two unconstitutional changes of power in Chad and Mali, and President Emmanuel Macron’s decision to end Operation Barkhane, signatories urged Sahelian governments, regional and international partners – including the AU, ECOWAS, EU, France, and US – to fulfil their commitments to prioritize the protection of civilians in their interventions. 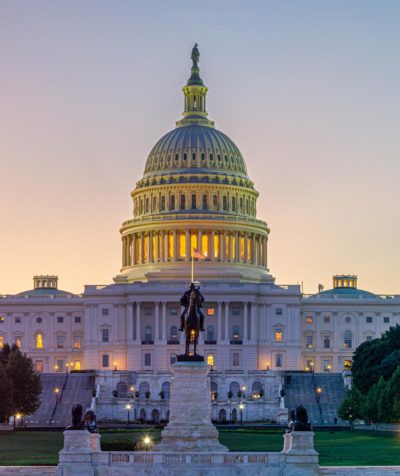 Crisis Action helped prepare three panelists from partners Mwatana, International Rescue Committee, and Oxfam for a key March Congressional subcommittee hearing on Yemen in Washington, DC. We helped secure the participation of Oxfam’s panelist, organized a hearing practice session for Oxfam and IRC witnesses, and supported Mwatana as they finalized their testimony.

This is the third year in a row that congressional staff on the House Foreign Affairs Committee or one of its subcommittees have approached Crisis Action for help in identifying briefers for the hearing, and it is the second year in a row during which this subcommittee hosted a majority-Yemeni panel of briefers.

Policy-maker briefing on justice and accountability

Crisis Action worked with partner SAM for Rights and Liberties and a panel of eight Yemeni civil society organizations to convene a briefing for policy-makers from the UN, European Parliament and national governments, on the need for a rigorous justice and accountability component within any peace talks. It was the first time several of the Yemeni CSOs had had the opportunity to engage with the international community on the peace process.

Prioritising Yemen at the G7

Ahead of the G7 conference in June, Crisis Action worked with partners to develop recommendations for joint action from G7 countries, including in support of the Yemen peace process. The communiqué published after the G7 Foreign Ministers meeting reflected (partially or fully) several of these recommendations, including condemnation of the Houthi offensive in Marib, and calls for women to participate in the resumption of peace talks.

Please refer back to your Crisis Action update email to read about this ground-breaking two-year project.

Crisis Action worked with partners to use the conflict’s 10th anniversary to renew public and political focus on key elements of the push for peace. This included: working with the Swedish Embassy in Beirut to host a briefing on detainees and missing persons; helping co-ordinate a UN virtual side-event through which Syrian partners briefed UN officials on a range of key issues, particularly detention and missing persons; convening a coalition to successfully urge the US to host a UN policy briefing on the day of the anniversary; and supporting Syrian partners to tell their stories across a variety of international media, including Russia’s Lenta,  CNN, The Guardian, Euronews, Il Fatto Quotidiano, Marie Claire and Sky News (online and podcast). 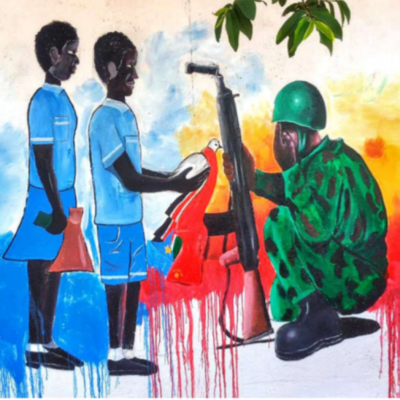 As part of efforts to encourage China to help rejuvenate the stalled peace process in South Sudan, Crisis Action and partners worked with local art collective AnaTaban to unveil a mural and animation depicting the hope local children have for peace with Chinese support.

Our communications strategy for the mural’s unveiling on 16 June (International Day of the African Child) secured coverage in national and international media, helped the mural trend nationally on Twitter (where that was seen by nearly 4 million people), and saw supporters sending digital postcards of the mural to Chinese envoys across East Africa.

In July, we will augment the campaign with an international policy briefing on the role of China in building a sustainable peace.

Over 200 organisations back calls for a global arms embargo

In May, Crisis Action coordinated a joint statement from 205 Burmese, regional and international organisations calling for a UN Security Council-enforced global arms embargo on Myanmar, in response to the recent military coup and violent suppression of peaceful protests.

To publicise the letter, we helped coordinate a media outreach (including a partner-led UN press correspondents’ virtual conference attended by over 70 journalists), contributing to coverage in (amongst many others) the New York Times, Al Jazeera (print/tv), Reuters, AFP and South China Morning Post (targeted for its influence within China, the biggest exporter of arms to Myanmar). We also co-ordinated and created assets for a digital campaign, #NotOneBulletMore, which was seen by over 10 million social media users worldwide in its first week. 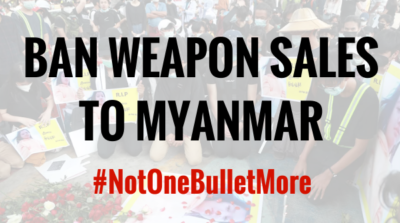 In the face UN Security Council inaction, Crisis Action coordinated national and regional partners to engage policymakers in key capitals in support of a strong UN General Assembly resolution condemning the military junta and calling for a suspension of all arms sales to Myanmar.

The General Assembly resolution was adopted on 18 June by 119 votes to 1 – and calls for an end to weapons transfers, the release of political detainees and for the military to respect the results of the November 2020 general election. This “emphatic rebuke” (New York Times) was “the broadest and most universal condemnation of the situation in Myanmar to date” (Guardian), and provides a solid basis to push for UN Security Council action.

Please refer back to your Crisis Action update email to read about this exciting new project.

Ahead of the Southern African Development Community (SADC) summit on 27 May, Crisis Action devised and co-ordinated a range of partner efforts to push the SADC for more decisive action in maintaining peace and humanitarian access in the conflict-hit region of Cabo Delgado.

These efforts included a letter to the SADC signed by 30 local and international partners, a panel discussion of academics and think-tanks on how the SADC should address the conflict, and a ‘Twitter storm’, timed to coincide with the summit, that reached over a million people across the region.

At the summit, the SADC approved a regional standby force to help protect civilians in Cabo Delgado, and unprecedented provisions for improving humanitarian operations – a major step forward after months of prevarication.

Coinciding with the visits of President Nyusi of Mozambique and President Ramaphosa of South Africa to Paris for the Financing of African Economies Summit on 18 May, Crisis Action coordinated another partner Twitter storm to draw attention to the need for France and Mozambique to prioritise civilian lives over gas interests (French energy company Total is one of the main investors in the conflict-hit region of Cabo Delgado). With nearly a million impressions, the campaign led to a number of partner interviews in Mozambique media, increasing pressure for action on the issue. 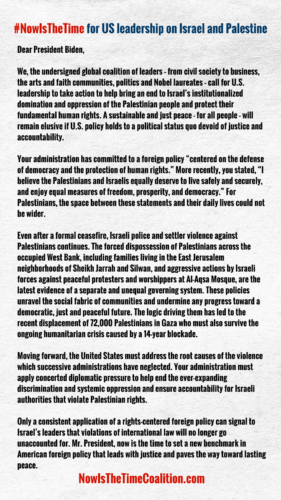 Responding to the escalation of violence in Gaza and Jerusalem in April and May, Crisis Action coordinated a global letter signed by 680 prominent individuals and organisations from 75 countries (including Israelis, Palestinians and Americans), calling for “U.S. leadership to take action to help bring an end to Israel’s institutionalized domination and oppression of the Palestinian people and protect their fundamental human rights”.

We supported promotion of the letter on social media, with  Jan Egeland, Premiere Urgence, International Federation for Human Rights, Avaaz, IfNotNow and many more using the hashtag #NowIsTheTime to share the letter with over 7 million people worldwide. We also conducted a media outreach, securing coverage in Al Jazeera (English and Arabic), Mediapart, and many more (including the front pages of several Palestinian outlets).