The crisis caused by fighting between armed resistance fighters from Tigray – the Tigray People’s Liberation Front (TPLF) – and the Ethiopian army has now spilled over from Tigray to other regions. Despite reports of famine and major human rights violations including sexual and gender-based violence by both the Government of Ethiopia’s forces’ and the TPLF, neither show any signs of ceding ground.

Against this backdrop, Crisis Action has navigated security risks for our Addis-based team to support partners to engage in strategic ways, with a focus on backing core partner Atrocities Watch Africa to encourage greater African engagement and advocacy on this crisis. 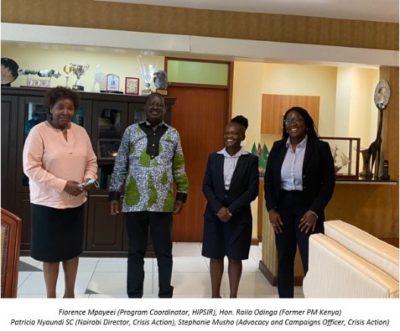 In October, when Kenya became Chair of the United Nations Security Council, President Uhuru Kenyatta made a clarion call to all parties to the conflict to “come to the table to negotiate and end the fighting, to allow for humanitarian access to the people of northern Ethiopia and Tigray”. Crisis Action helped make this happen by:

Mobilising African voices to stand in solidarity with Ethiopia

Crisis Action also supported Atrocities Watch Africa in leading African influencers and civil society organisations on a social media campaign that brought renewed attention to the crisis and called for stronger regional action. The social media campaign dubbed #UbuntuforEthiopia trended in the Horn of Africa and reached more than 2 million views with 6.1 million impressions. One of our partners received a direct message from Billene Seyoum, the Foreign Press Secretary for the Office of the Prime Minister of Ethiopia querying their participation. This confirmed both that the campaign messages were seen by the Ethiopian government and that the government cares what African influencers are saying publicly about the conflict.

Mobilising African Evangelicals to engage on the Ethiopia crisis

Cognisant of the influence of the evangelical faith on Prime Minister Abiy, Crisis Action coordinated a private briefing on the political nuances of the conflict to the leadership of the Association of Evangelicals in Africa (AEA). AEA leaders from 9 countries including Zimbabwe, Cameroon, South Sudan, Botswana, Kenya, Chad and Senegal were participant.  There was clear alignment that evangelicals from Africa could be the catalyst needed in this stalemate situation and the AEA committed to develop a joint strategy with African faith leaders for high-level policy maker engagement on the resolution of the conflict.  Partners from OSF; Amnesty International; Atrocities Watch Africa; and World Vision International made brilliant presentations. Following the briefing Crisis Action heard from OSF East Africa Director saying “It was a great pleasure to meet such a high calibre of religious leaders and it is a mark of the convening power of Crisis Action to have made this happen. And the conversation was also great, relevant, inquisitive and sympathetic. Thank you for making it happen.”