On October 15, the UN Security Council adopted a resolution renewing the UN Integrated Office in Haiti (BINUH)’s mandate for nine months following difficult negotiations by the council. The resolution includes calls by Haitian civil society to conduct an assessment of BINUH within six months including on how the mandate could be adjusted to address the ongoing challenges faced by Haiti and how to increase the effectiveness of the mission in supporting engagement between stakeholders, including civil society. The resolution also avoids reference to a pre-set electoral calendar, instead calling for an “inclusive inter-Haitian national dialogue, a commonly accepted framework to permit the organisation of inclusive, peaceful elections as soon as technically feasible”. This was a big win for Haiti especially when the US was pushing for a technical role over the BINUH mandate and was pushing for elections by the end of the year. Crisis Action successfully coordinated work towards this in several ways:

Amplifying voices of Haitian women leaders in the UNSC

Crisis Action worked in collaboration with the Government of Norway, currently on the UN Security Council, to organise on September 8th a well-attended informal briefing for Security Council members and UN officials by three Haitian female civil society leaders. Attendees included representatives from China, France, Ireland, the US, Kenya, Mexico, Saint Vincent and the Grenadines, as well as the UN Department of Political and Peacebuilding Affairs (DDPA). 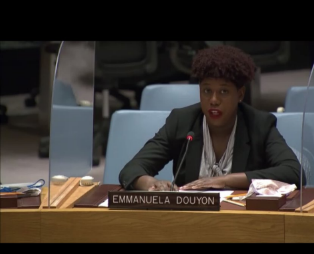 The briefers, Rosy Auguste (Program Manager of the National Network for the Defense of Human Rights), Magalie Georges (General Secretary of the National Confederation of Educators of Haiti) and Magali Comeau Denis (National coordinator of the Commission to find a Haitian Solution to the Crisis, presented a compelling picture of the deepening security, humanitarian, political and human rights crisis in the country. They detailed the risks to civilians posed by rushed elections in the context of gang control of large amounts of national territory, their proposals for an inclusive political transition and their recommendations for the UN special political mission to Haiti, the Bureau Intégré des Nations Unies en Haïti (BINUH) ahead of its renewal in October. Briefers thanked Crisis Action for its ‘extraordinary support’ and noted how much they valued being able to reach a cross-section of Council members.

At the request of the Kenyan mission to the UN, (UNSC President in October), Crisis Action supported another powerful female Haitian civil society leader, Emmanuela Douyon Executive Director of POLICITÉ, to formally brief the Council during its open debate on BINUH on October 4. Ms. Douyon’s briefing provided compelling recommendations to the Council and BINUH on the need for support to an inclusive political transition, justice sector reform, development and security assistance. This concluded Crisis Action’s exit from its market response on Haiti.