In October, Crisis Action took the decision to scale back its engagement on Mozambique, consistent with the original intention to help catalyse more concerted action by partners and then withdraw. 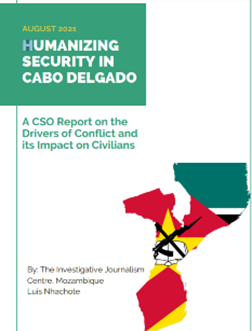 On 28th October, Crisis Action and a coalition of 13 Mozambican, South African and pan-African partners, launched the first ever report on the drivers of conflict in Mozambique from the informed perspective of the internally displaced persons from the regions directly affected by this conflict. Attending the launch was an international audience of close to 60 leaders from Mozambique, the SADC region, Denmark, Germany, the UK and US as well as other parts of Africa.

The report not only exposes those profiteering from this ongoing conflict but also provides the Government of Mozambique with the names of the insurgency leaders to counter the government claims that they could not have dialogue with “a faceless enemy”. The report launch was a resounding success, and was immediately reported on by News24 and MSN. Partners have made copies of the report available on their websites, including the African Defenders website, CDD website, CSVR website, DHPI website. Good Governance Africa also shared the report in their weekly newsletter.

Johan Viljoen, Director of the Denis Hurley Peace Institute said, “[t]his is a very helpful advocacy tool for us because it helps us tell our stakeholders what Mozambicans want when it comes to resolving the conflict in Cabo Delgado.”

The report has already helped partners to access decision-makers in Europe and the African Union. On 29th October, when the EU Security Commission met to discuss the security situation in Mozambique, members received copies of the report as their pre-reading material. The AU Special Envoy for Mozambique from the African Court on Human and Peoples’ Rights also asked for a copy of the report along with a briefing from partners. Crisis Action coalition partners will also be partnering with CSIS Africa to help amplify the reach of the report to US policymakers.