On the 16th October, the member states of the Association of South-East Nations (ASEAN) decided not to invite the Burmese junta to the 26 October ASEAN Summit on account of  “insufficient progress in the implementation of the 5-Point Consensus, as well as concerns over Myanmar’s commitment”. This was an unprecedented snub by ASEAN, breaking with its decades-long policy of non-interference in the affairs of member nations. Insiders confirmed that this was driven by international pressure to not legitimise the junta. The junta has since taken steps to signal its willingness to cooperate by releasing over 5,000 detainees. Crisis Action has been told by one political activist released on the 20th October that “the pressure works. That’s why we were released. The junta are very vulnerable now, so we need more international pressure.” Crisis Action’s role in applying this pressure included focusing international attention on the UN’s decision about who should represent Myanmar. 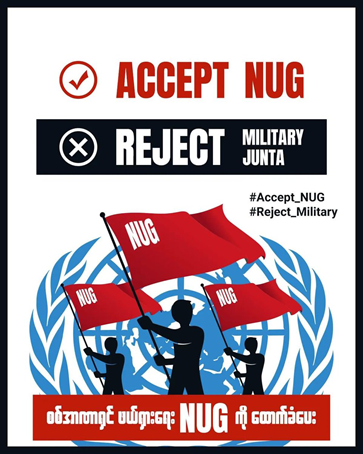 s UN General Assembly opening, Crisis Action organised a coalition of Burmese and international partners to call on the UN to reject the Burmese junta as the representative government of Myanmar and instead accept the credentials of the democratically elected National Unity Government (NUG).   As part of this work, Crisis Action:

Crisis Action was delighted to have assurances from the Credentials Committee members and key decision makers that the junta’s credentials would be rejected by the Committee and that they will work to ensure that Ambassador Moe Tun remains in place as the representative of the people of Myanmar. According to Chris Sidoti, former UN Myanmar investigator and current NUG advisor, “Crisis Action continues to lead the way with the UN Security Council and UN. Its leadership has been… critical to the successes there, from the continuing pressure on the Council, to the adoption of the GA resolution… to invaluable work on the credentials issue that has guided the NUG’s approach.”