In the past three months, presidential elections were held in Burkina Faso and Niger, focusing global attention on the internal political dynamics of these two key actors in the Sahel. Following the lead of local Sahelian partners who were concerned that the volatility of the elections would make any advocacy too risky, Crisis Action worked with Sahelian partners on targeting European policymakers, notably the UK who was ready to send another contingent of soldiers to the UN mission in Mali (MINUSMA), and the EU who was in the process of revising its Sahel strategy.

In December, Crisis Action learned from EU sources that their Sahel strategy adoption was delayed because many EU member states wanted the new EU Sahel strategy to focus more on the root causes of the Sahel crises – an explicit ask of pillar two of the People’s Coalition, the coalition Crisis Action built. This is following several engagements by Crisis Action and members of the People’s Coalition with EU and member state officials on how the EU should engage in the Sahel.

In November, Oxfam, a member of the People’s Coalition, successfully pushed the EU to adjust its Sahel strategy consultation process to include local civil society input. This led to Crisis Action, working with Oxfam, to create an opportunity for partners to participate in a meeting with the EU Sahel team leaders, delegations and senior policy makers. Sahelian partners dynamically raised the need for greater EU strategic intervention to support youth leaders, decrease impunity to build public trust, and improve the region’s governance.

A European diplomat confidentially told Crisis Action that EU member states’ “thinking had evolved over the course of 2020” as they realised existing engagement had not improved the lives of Sahelian civilians, and also based on “persistent civil society engagement, including yours.” The EU Foreign Affairs Council (FAC) is expected to adopt conclusions on the revised Sahel strategy in February 2021. As the FAC can only adopt broad political guidance, it will be crucial for member states to adopt an action plan and Crisis Action will remain engaged as we continue to support the People’s Coalition.

Increasing UK parliamentary oversight of the deteriorating crisis in the Sahel 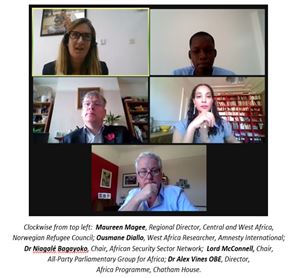 The UK Foreign, Commonwealth and Development Office (FCDO) articulated their commitment to ensuring greater accountability and increased compliance with international humanitarian law by national and regional security forces as part of its deployment of 300 peacekeeping troops to the UN peacekeeping mission in Mali, MINUSMA. Ahead of the UK’s planned deployment, Crisis Action: 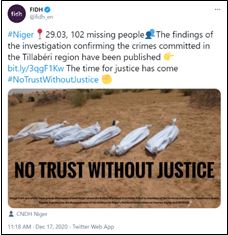 In December, Crisis Action partner and member of the People’s Coalition, Réseau Panafricain Pour la Paix, la Démocratie et le Développement (Pan-African Network for Peace, Democracy and Development – REPPAD) and the National Human Rights Commission of Niger (CNDH) released a report determining that elements of Niger’s national security forces were responsible for the extrajudicial executions of unarmed civilians in western Niger. This landmark report was the first time a constitutionally empowered commission in Niger focused on the responsibility of state security forces for civilian deaths caused during their operations. Significantly, the report underscored a key problem inherent in government strategies: an over focus on counter-terrorism and strengthening state security without parallel improvements in governance and accountability. The People’s Coalition has consistently elevated this message and that it is not leading to better protection of Sahelians.

Crisis Action worked with REPPAD to ensure the findings of this landmark report were seen by policymakers and media in Europe and the US. We secured media coverage of the report, including a piece on France’s TV5 and a story in The New York Times that referenced the report in an article on attacks in Niger. Crisis Acton also facilitated a briefing for REPPAD with the French Special Envoy for the Sahel, Frédéric Bontems. He committed to championing the report’s call to strengthen the capacities of Sahelian National Human Rights Commissions and affirmed France’s commitment to fighting impunity in the Sahel. We also helped partners to share the report, disseminating a social media toolkit and promoting the #notrustwithoutjustice hashtag. The Global Centre for the Responsibility to Protect shared the report in their atrocities alert.