The situation in Yemen remained volatile in the last 3 months and was further complicated by the Trump administration’s decision to designate the Houthis as a Foreign Terrorist Organization (FTO). That decision risked impeding vital humanitarian aid to 80% of Yemenis. On top of that, the Trump administration decided to push through arms sales to the Kingdom of Saudi Arabia (KSA) and the United Arab Emirates (UAE) signalling that the Yemeni war was far from over. Following these developments, Crisis Action coordinated a campaign focused on delaying and reversing the designation of the Houthis as an FTO, and to push the US Congress and administration to freeze these new arms sales deals. During this time, Crisis Action also engaged partners, policy makers and Yemen experts harnessing their inputs for updating our Yemen campaign strategy. 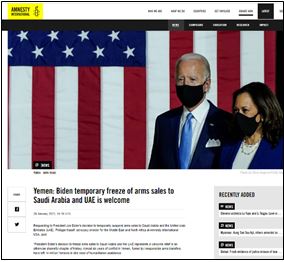 Within 10 days of President Biden taking office, the US government decided to pause the arms sales and transfers to the KSA and the UAE and also paused the enforcement of the designation of the Houthis as an FTO which could have had catastrophic impact on the distribution of humanitarian aid to the majority of Yemenis. These 30-day pauses, we hope, will lead to reversals which is the policy position built by Crisis Action and partners in the last two years, underscoring that the US must not enact unilateral punitive measures that interfere with humanitarian operations or complicate a push for peace.

In the last two years Crisis Action has supported and facilitated numerous op-eds, letters, journalist accounts, and Congressional hearings, which resulted in Congress voting to overturn sales to the Saudis and Emiratis in 2019, a policy which was short-circuited by a veto by President Trump. Since Biden’s election in November, Crisis Action has worked closely with partners and Congressional offices to help inform the approach taken by the incoming Biden administration, including: 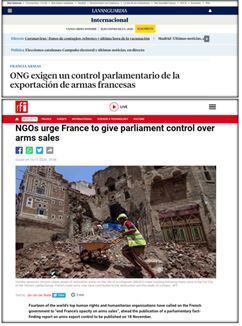 In November, the fact-finding mission of the French National Assembly publicly released its findings in a report that acknowledged the weakness of parliamentary oversight on arms sales, while also highlighting the link between French arms sales to the Saudi-led coalition and the conflict in Yemen. The report echoes the recommendations made by a coalition built and coordinated by Crisis Action over the past two years, mainly that France needs to create a permanent parliamentary delegation on arms sales control and enable parliamentary access to classified intel.

Crisis Action’s coalition brought together Yemeni, regional, French and international NGOs to work together to raise public awareness on the consequences of French arms sales to Saudi Arabia and the UAE on the dire situation in Yemen.

The two co-rapporteurs of the report thanked Crisis Action and partners directly for their contributions and mentioned Crisis Action’s indispensable facilitation role. “The debate over France’s arms exports would not have arisen without the mobilization of NGOs,” they wrote in a detailed section of the report on civil society’s productive role.  A senior staff member of the International Federation for Human Rights described the support of Crisis Action as “key to coordinate such a challenging campaign and to gather Yemeni actors and humanitarian actors along with human rights NGOs to push on France accountability.”

It is important to note that the Minister of Foreign Affairs publicly acknowledged on a live radio show the recommendations of the fact-finding mission and indicated that the government will consider them. Crisis Action and partners will continue to push for their implementation.

After consultations with partners, policy makers and Yemen experts, Crisis Action has updated its Yemen campaign strategy to focus on working with partners to contribute efforts towards an enabling environment for inclusive peace talks. Crisis Action plans to work with partners to (i) influence the UN Security Council to adopt a more inclusive framework replacing Resolution 2216, (ii) push the new US administration to deliver on Biden’s promises of ending arms sales and pressuring parties to the conflict to reach a deal that includes ending the war in Yemen and (iii) press for more funding from Gulf States and the US at the Yemen 2021 pledging conference to help reduce the massive humanitarian needs.