UN Board of Inquiry findings made public

On 6 April the findings of the UN Board of Inquiry into attacks on certain schools, hospitals and refugee camps in Syria were made public. This was the culmination of a long Crisis Action-supported campaign to both establish the Board of Inquiry and get the findings publicized. Although the findings were disappointing, they concluded that it was “highly probable that the Government of Syria and/or its allies had carried out the airstrikes”.

Crisis Action then coordinated partner follow-up recommendations to UNSC members, including that the Board share their full report with Syria accountability mechanisms in order to ensure future accountability. Recommendation were taken up by France, Germany, the US and others. 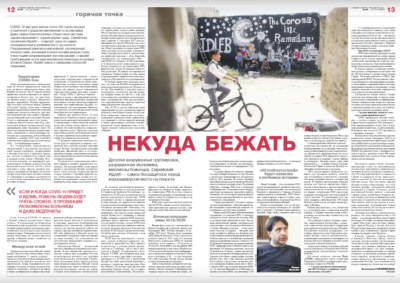 Crisis Action is currently supporting partners in light of COVID-19 for the release of most vulnerable detainees inside Syria, coordinating between the Office of the Special Envoy and detainee groups to strengthen cooperation. We also convened meetings between key Syrian humanitarians and senior UN policymakers to update on immediate support needs to prevent a COVID 19 outbreak in Idlib, and connected partners inside Syria, such as the Idlib Health Directorate’s Dr. Munzer Khalil, to international media to raise the alarm over lack of funding.

Crisis Action has also continued to facilitate dialogue and amplify Syrian voices inside Russia, supporting Russian independent media to highlight violations committed by the Russian government in Syria, the dire humanitarian situation in Syria’s Northwest and the impact of a potential COVID19 outbreak (and subsequent publication in Arabic media).

Renewal of the Arms Embargo and Sanctions regime campaign 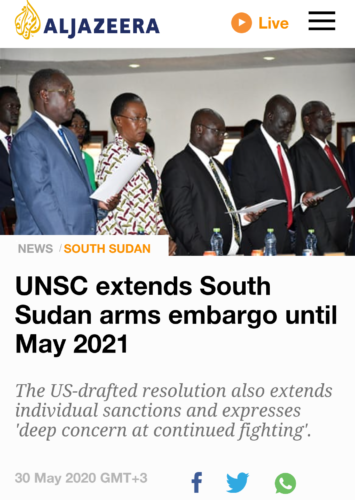 Partners deployed both public and private advocacy actions including; a video teleconference briefing by South Sudanese partners complementing a briefing paper which policymakers described as an extremely powerful and worthwhile session. We facilitated the delivery of private letters by the South Sudan Civil Society Coalition, calls and letters by eminent Africans to South African government officials, the AU Commission and the A3 members of the UNSC; placing of an op-ed in the South African media outlet by veteran ANC member and coordinated the signing of an open letter to UNSC by eminent civil society leaders in Africa.

After 6 years of working with partners to secure lasting peace in South Sudan, Crisis Action has made the decision to exit from the campaign. We made the decision having assessed there was a de-escalation of violence and the ceasefire brokered in 2017 was largely holding. This is bolstered by the fact there is a vibrant civil society in place in South Sudan who, together with regional partners and INGOs, will continue to advance advocacy priorities designed to secure implementation of the peace agreement.

Within 24 hours of a Saudi-announced unilateral ceasefire in Yemen on 8 April, we coordinated a joint statement by 59 Yemeni and international NGOs cautiously welcoming the announcement and calling on all parties to cease hostilities, begin peace talks, release detainees, and halt interference with aid and imports. 20+ media outlets reported on the statement, including the Guardian, CNN Arabic, AFP, and the National Interest.

We worked with the US House of Representatives Subcommittee on the Middle East and North Africa to help organize its first “virtual briefing” for Members of Congress, on the war and humanitarian response in Yemen, on 28 April. We secured opportunities to brief for Radhya Almutawakel, chair of Mwatana for Human Rights, and Abdul-Ghani Al-Iryani, senior researcher at the Sana’a Center for Strategic Studies, marking the first time multiple Yemeni CSO representatives have formally a Congressional committee. Subcommittee Chair Ted Deutch released a statement about the briefing that reaffirmed calls to end the war, reduce humanitarian suffering, and contain Covid-19 in Yemen.

Influencing policymakers and media ahead of donor conference

In the week leading up to a 2 June pledging conference for Yemen’s 2020 humanitarian response, we supported nine Yemeni speakers by organizing two separate telebriefings for international policymakers and media outlets. The Yemeni CSO representatives hailed from a range of disciplines and regions, and briefed both audiences on the latest humanitarian and peacebuilding developments in their communities, especially in light of the onset of Covid-19 in Yemen. They urged policymakers to fully fund the humanitarian response, while working to ensure aid reached populations in need, and pressed international journalists to draw attention to humanitarian funding shortfalls and to continue reporting on Covid-19’s impacts in Yemen.

Response to COVID-19 in the Sahel

In April, Crisis Action coordinated two private briefings to Sahelian governments and donors about the COVID response in the Sahel, signed by diverse coalitions of African and international NGOs. Partly based on lessons learnt from Ebola, they presented concrete recommendations to combat the pandemic, from an increase in UN humanitarian flights to humanitarian access, from community engagement to distance learning for Sahelian children, from debt cancellation to access to treatment. The letters also included measures to address the root causes of the broader governance, protection and security crisis in the Sahel, which the COVID pandemic only underscores.

The private NGO letters were greeted with a high level of interest, triggering a series of five virtual meetings with top officials in charge of the Sahel at the UN, EU, France, the UK and the US in May. They all said they took on board several recommendations and wanted to continue a regular dialogue with civil society. The meetings provided a unique insight into how key international players see their role in addressing the crisis in the Sahel, at a time when violence against civilians is on the rise as a result of fresh attacks by both armed groups and security forces.

Mobilising a global movement calling for a global ceasefire

Crisis Action collaborated with Avaaz on a global ceasefire petition which amassed more than 2.2 million signatures. We also launched a digital #Doves4Peace campaign which was tweeted in 50 countries and reached over 8.6M people. Finally, we ran events with the Stockholm Peace Forum and TEDxLondon to raise awareness about the call for a global ceasefire.

As part of our work to mobilise a global movement calling for a ceasefire, Crisis Action coordinated a letter signed by 17 African civil society organisations from 12 countries and regions to the African Union Peace and Security Council, and copied to Regional Economic Committees across Africa, calling for a ceasefire across the continent in order to contain the pandemic. We worked with the Elders to spur timely, powerful statements from Mary Robinson and Ban Ki-Moon calling for UNSC leadership and action. Finally, we worked to help the Canadian Foreign and Development Ministers to issue a joint statement supporting the global ceasefire.

We coordinated a powerful press-release co-signed by some of our leading partner CEOs to express civil society’s concern at the UN Security Council’s failure to agree on a global ceasefire resolution, and to name and shame those blocking it, which was covered in Reuters, the The New York Times and France 24.

Feedback from policymakers and partners alike confirmed that Crisis Action’s coordination has been crucial to give momentum to the push for a global ceasefire. As we feel that maximum momentum around a global ceasefire has now been achieved, we will be winding down our coordination work on the #GlobalCeasefire campaign to redeploy our capacity to our ongoing country-specific campaigns (on Sahel, Syria, Yemen and South Sudan), and will be handing the campaign over to our very capable partners to keep the movement alive.

Crisis Action, in collaboration with the Iraqi Al-Amal Association, organized the first ever media telebriefing by Iraqi activists and human rights defenders on May 15th. More than 110 people attended the event, including representatives of foreign governments and diplomatic missions, members of the local and international NGO ​community, and journalists from multiple outlets. The Iraqi speakers used this opportunity to call on the new government to investigate violations committed against protestors, including assassinations, arbitrary detentions, and torture. ​The event aimed at spurring media coverage at a time when ​the media’s interest in the Iraq protest movement ​is receding.