Yemen experienced a rapid escalation in violence throughout December while January was a record-breaking month for civilian casualties, with a Saudi-led air strike on a detention facility leading to the worst civilian casualty incident in three years. It is no coincidence that this escalation comes after the UN’s official investigative mechanism for monitoring the conflict was disbanded due to Saudi Arabia’s push at the Human Rights Council.

To address the fall-out of this accountability crisis, Crisis Action has worked with partners to shine a global spotlight on the key individuals committing atrocities and spoiling the peace process and campaign for a new and better accountability mechanism.

Spotlighting the Spoilers of Peace of Yemen 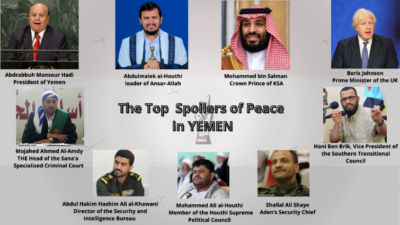 With partners struggling to bring their agendas of accountability and justice to the forefront of the deliberations on Yemen, Crisis Action, in partnership with the Cairo Institute for Human Rights, launched the Spoilers of Peace campaign to deter further atrocities, end the cycle of impunity and ensure accountability for crimes committed against the people of Yemen.

As part of this work, Crisis Action:

While the campaign received significant media coverage in the Middle East and Arab world, there was limited coverage in western media which would have been critical to turning a global spotlight not only on Yemen but also on the specific individuals including UK Prime Minister and Saudi Prince’s role in perpetuating the conflict and the suffering of Yemenis.

Catalysing a global campaign for a new accountability mechanism

Accountability is vital to peace. It is a common maxim, well known in legal and peacebuilding circles, but the most recent round of attacks on Yemeni civilians underscores the need to make this case more explicit to increase pressure to end the cycle of impunity. To accompany the public and media mobilisation spurred by the Spoilers of Peace campaign, Crisis Action supported and convened human rights partners to develop a strategy for establishing a new accountability mechanism at the UN General Assembly (UNGA). As a critical first step, Crisis Action has been working with partners to engage states willing to sponsor and champion this mechanism. Promising conversations are underway with the US, Netherlands and Germany.