In the aftermath of the Taliban movement’s return to power, Afghanistan’s faltering economy has slid towards collapse as a nationwide humanitarian crisis continues, with the majority of the country unable to feed itself.

Crisis Action has focused its efforts on working with partners to push the Biden administration towards a policy shift on financial restrictions on the country given the devastating impact on civilian populations.

In an effort catalysed by Crisis Action and our partners, nearly 50 Congressional Democrats called on President Biden to “urgently modify current U.S. policy regarding the freeze of Afghanistan’s foreign reserves and ongoing sanctions”. As a follow up to this letter, congress forced a vote on the White House position on Afghanistan’s economy.  This is a significant milestone towards pushing Biden towards a US policy shift which Crisis Action and partners judged would more likely happen if Biden is if called directly to do so by Democrats in the House and Senate. Crisis Action: 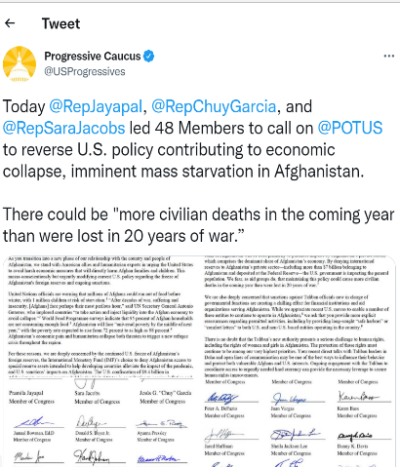