In November and December, Crisis Action held the second series of dialogues between Russian and Syrian civil society in The Berlin II dialogues, in honour of the first ‘ice-breaking’ dialogue held in Berlin in 2019. This time, participants from Syria and Russia convened online enabling other international partners to participate. Participants included leading Syrian NGOs Association for the Detainees and the Missing Persons in Sednaya, Baytna Syria, Ceasar Families Association, Impunity Watch, Syrian Center for Media and Freedom of Expression (SCM), Ta’afi, the coalition of families of persons kidnapped by ISIS – Da’esh (MASSAR), Women Now for Development, Kesh Malek. On the Russian side, participants included Human Rights Center Memorial, Civil Assistance Committee, the Moscow Helsinki Group, Russia Behind Bars, Amnesty International Russia and the Secretary General of the Russian International Affairs Council, an academic and diplomatic think tank established by the Russian Ministry of Foreign Affairs – representing an important step in our efforts to diversify relationships in Russia. 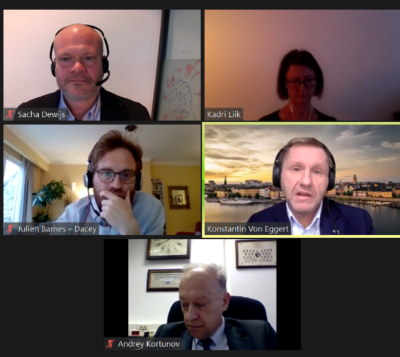 Partners held candid conversations on how best to work in Russia given the increasing crackdown on civil society and independent media. Syrian partners gathered further insight on Russia’s current role in Syria, and where advocacy by Syrians can have impact.

Partners appreciated the convenings with Artno from Women Now saying, “The dialogue enabled us to understand the challenges and difficulties that they are facing as civil society organizations” and another partner remarking how the dialogues were “important conversation since we are talking to those we don’t usually talk to (Russians).”

Bringing justice and accountability for crimes against civilians in Syria

The event was hosted by the influential Moscow Helsinki Group – one of the oldest and most respected human rights groups in Russia and had about 25 young lawyers and activists from Russia as participants. Crisis Action secured a panel of incredible speakers including  Ilya Novikov, a lawyer representing a family member of one of those allegedly killed by the Wagner group; Influential Syrian activist, Mazen Darwish; Denis Korotkov, a journalist and investigator for Novaya Gazeta and Karinna Moskalenko, a lawyer who won the first ever case against the Russian Federation in the European Court of Human Rights.

During the discussion, Mazen Darwish of the Syrian Centre for Media and Freedom of Expression, praised Crisis Action for our role in facilitating the “incredible partnership between international, Syrian and Russian organizations that sends a clear message to the government that people can put their hands together to ask for justice.” A Russian lawyer specialised in asylum and refugee cases said to us the meeting helped him gather evidence about the situation facing Syrian refugees upon return to Syria. He expressed gratitude saying,“ This is so important, it will help me save their lives.”

“Ayouni” Screening in Russia: changing the narrative of war inside Russia

Crisis Action supported the Moscow Helsinki Group to screen the powerful documentary Ayouni (see trailer) about detention and enforced disappearances in Syria.  This is evidence that inside Russia, discussions on Syria are entering the mainstream more and more. The screening was followed by a discussion with Noura Ghazi, the protagonist in the movie, Yasmine Fedda, the director, and Wafa Mustafa, Syrian journalist and activist. The event created a space for Russians to have a deeper understanding on the issues relating to detention and enforced disappearances. Yasmine Fedda, the director of the film exclaimed how “very happy that this happened, it was really great to be able to share the film with audiences in Russia, …”.

Crisis Action organised a training for 90 Syrian, Yemenis and Iraqi partners and activists on “how to conduct open-source investigations.” The training was delivered by Hadi Al Khatib, co-founder of the Syrian Archive, a Syrian led project that aims to preserve, enhance and memorialise documentation of human rights violations and other crimes committed by all parties to conflict in Syria for use in advocacy, justice and accountability. This was the last of a series of capacity building sessions that Crisis Action has provided, following requests by Syrian partners to help strengthening their capacity in various areas.