On 23 January, just two weeks after the Economic Community of West African States (ECOWAS) imposed sanctions on Mali in response to the military junta’s efforts to extend power and delay a return to civilian rule, there was a coup in Burkina Faso. A week later, gunmen foiled a coup attempt in Guinea-Bissau. The region was also roiled by a dramatic diplomatic escalation between the French and Malian governments and growing anti-French sentiment across the West Africa region. 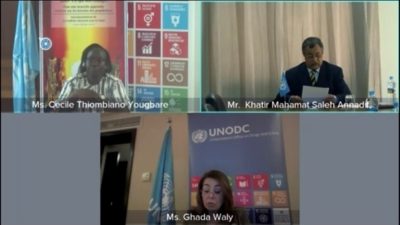 UN Security Council member diplomats were directly challenged to change their policy direction on the Sahel and in response conceded to the need for such a change. This was a direct result of Crisis Action’s efforts to enable the UNSC to hear directly from Cécile Yougbaré, a Burkinabé female civil society leader on the impact of the crisis on the civilian population and the failure of the current security-first approach to protect civilians. The United States Ambassador described Cécile’s intervention as “compelling and powerful” and declared before the Council that the recommendations of the People’s Coalition for the Sahel “certainly will influence the US government’s approach to the challenges we face in the Sahel”. The African Union Special Representative to the Sahel and Mali also remarked in appreciation of Cécile’s intervention that “we (policy makers) need to hear young citizens, female advocates and especially African upcoming leaders – because their voices matter.” The Norwegian Mission to the UN tweeted their support for the inspiration offered by Cecile’s intervention and presence. 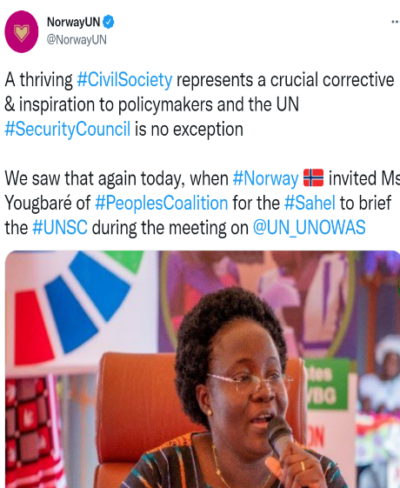 multiple calls with partners in the wake of surges of violence in Mali and the coup in Burkina Faso, Crisis Action also drafted and secured media coverage for a public statement from 27 civil society organisations urging Sahelian governments and their international backers to restore civilian trust by reorienting their response to the crisis and emphasising the need for greater transparency and accountability in the conduct of military operations. The statement received coverage in Burkina Faso; France, and in the Mediapart.

Burkina Faso was suspended without sanctions by ECOWAS following the rapid advocacy work coordinated by Crisis Action ahead of the ECOWAS extra-ordinary Summit on Burkina Faso.
Partners in Burkina Faso were concerned that ECOWAS Heads of States would impose sanctions together with the suspension from ECOWAS following the coup in Burkina Faso. Their concerns came having observed the negative impact on populations in Mali of sanctions imposed after the 2020 coup when Mali was also suspended from ECOWAS. With days’ notice of the summit date, Crisis Action worked rapidly with partners to ensure their concerns were captured in a document that partners privately shared and delivered to staff and advisors of ECOWAS governments in Benin, Togo, Cote D’Ivoire, Senegal, Nigeria, Ghana and Niger.

Policymakers affirmed the utility and timeliness of this initiative with the advisor to the AU High Representative to the Sahel and Mali saying to Crisis Action he will “use these messages as a template for the Ambassador’s intervention.” The representative of the Foreign Minister of Senegal welcomed the balance of civil society messages, noting that he “fully agree[s] with civil society messages and their conditions suggested for the junta”.