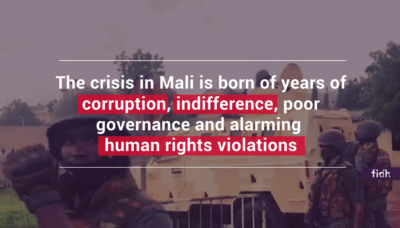 28 local, regional and international NGOs released a joint statement calling for the political crisis in Mali to be a wake-up call of the need for a radical shift to address growing destabilization not only of Mali, but Burkina Faso, Niger and the wider Sahel region. Signatories emphasized that events in Mali had heightened the urgency of  calls for a change of approach, reiterating that prioritizing a military response to the crisis had failed to promote stability, protect civilians from atrocities, and alleviate inter-communal grievances. The statement was received positively by stakeholders, with the UK government in particular expressing both broad agreement with the sentiments and interest in meeting with coalition leaders

Civil society briefings in lead up to Ministerial Roundtable

Members of the People’s Coalition met with senior French, British, and EU officials in the weeks leading up to the High Level Ministerial Roundtable on the Central Sahel. In one such meeting, organized by Oxfam with the support of Crisis Action, African Security Sector Network, Centre Diocésain de Communication, and WATHI briefed EU member state representatives on the Africa working group (COAFR) as to the importance of prioritizing improvements in governance, strengthening the role of the penal system, and increasing outreach to populations and civil society in rural areas. This intervention was acknowledged in a confidential strategy non-paper on the Sahel by the European External Action Service, where they emphasized the need to continue consulting with civil society in similar ways.

As part of Crisis Action’s partners efforts to engage Russian civil society and the broader public on Syria, we supported Human Rights Watch to amplify media and public visibility inside Russia around their new report “Targeting Life in Idlib”, published on October 15. The report spurred impressive media coverage, including a critical article and follow-up interview in Svoboba, in-depth coverage on the BBC Russian Service and pieces on the popular news site RosBalt, the financial news site FinAm, and regional news site Real-Vin. For most of these platforms, this is the first coverage of human rights abuses committed by Russia in Syria.

Crisis Action is providing support on the finalization and launch of the first-ever report by Russian human rights defenders on violations by all actors in Syria, including Russia. The report will be published in December via an international media briefing that will include both Russian and international journalists. A series of advocacy activities will then follow the media launch over the following months in European capitals, New York and Beirut.

On 21 October, Crisis Action delivered training on “Advocacy at the UN Human Rights Council and within the UN System,” attended by more than 35 activists from Syrian CSOs. The session’s key objectives were to provide an understanding of the key functions of the UN’s international human rights mechanisms and processes, and how CSOs can most effectively engage the UN in Geneva and New York.

Crisis Action and partners helped to secure over $200 million in funding from Saudi Arabia and Kuwait for the UN’s humanitarian response in Yemen,. This involved working with partners to persuade the Middle East Subcommittee chair in the US house to demand, in a public letter signed by 55 Representatives, that the US “press the international community – especially Saudi Arabia and the UAE – to deliver significant contributions to humanitarian funding for Yemen.” We followed this up by pitching CNN journalist Nima Elbagir on a story on Gulf states’ under-funding, and subsequently worked closely with her to develop the story. The result “Aid cuts by Trump and some US allies are costing lives in Yemen” directly linked rising Yemeni malnutrition to the failure by the UAE, Saudi Arabia, and the US to adequately fund the UN humanitarian response.

In September, Crisis Action helped organize and circulate a joint statement among 8 Yemeni and international human rights NGOs urging all warring parties to reveal the fate and whereabouts of the forcibly disappeared and urgently release all those arbitrarily detained. Towards the end of September, the government of Yemen and Ansarallah reached an agreement in Switzerland to free more than one thousand detainees in the largest-ever prisoner swap since the conflict began in 2015.

The renewal of the Group of Eminent Experts on Yemen (GEE)

The UN Human Rights Council (HRC) voted to renew and strengthen the mandate of the Group of Eminent Experts on Yemen (GEE) for another year. While previously its mandate was focusing on reporting human rights violations, the GEE will now also be able to collect and analyze evidence that could be instrumental in pursuing accountability for war crimes in Yemen. These were exactly the asks of our coalitions private and public messaging around the GEE.

Bringing outside pressure for a ceasefire in Nagorno-Karabakh

The conflict in Nagorno-Karabakh is escalating dangerously, threatening ethnic cleansing and regional instability, while key diplomatic voices are missing. On 16 October, we launched an Emergency Response, targeting a few key capitals to play a more active diplomatic role and to pressure all parties to honour a durable ceasefire and protect civilians.

Over 50 NGO partners attended a global briefing in late October with Svitlana Valko of International Partnership on Human Rights and Thomas de Waal, Carnegie fellow, which reinforced our campaign proposition and affirmed the need for coordinated joint action.

To avert post-election violence in Tanzania following the 28 October elections, we launched an Emergency Response with our partners Tanzania Election Watch, and were successful in encouraging the Spokesperson of the UN Secretary General and the African Union Chairperson to call on President Magufuli to ensure free and safe elections. The Tanzania National Election Commission swore in agents of opposition candidates, when they had previously refused to do so. Members of the Panel of Eminent Pan Africanists briefed senior officials in the office of the UN Secretary-General.

As had been anticipated President Magufuli was declared winner of the election notwithstanding the massive irregularities as documented by the Tanzania Election Watch in its Preliminary Election report. The government responded to opposition’s rejection of the results by arresting the opposition leaders, and the AU Chairperson has been called upon by Tanzania Elections Watch to facilitate a mediation of the election dispute in Tanzania.