Political leaders in South Sudan continue to make slow progress in enacting the 2018 peace agreement, with President Kiir casting doubt publicly over whether it can be implemented.  This state of affairs underscores the need for sustained pressure by external actors who can use the leverage they have over the leaders in South Sudan to nudge them towards peace and commitment to the obligations they have under the 2018 peace agreement. Given China’s position as a global power and the largest external investor in South Sudan, and in light of Chinese declarations of the value they place on the relationship between the two countries, Crisis Action’s China programme continues to explore ways in which China can be encouraged to play an overt and positive role in re-energising the peace process and holding South Sudanese politicians to their obligations under the peace agreement.

Catalysing conversations on China’s role in revitalising the peace process

Crisis Action worked with the China Africa Project to coordinate a webinar that would explore the role of China in rejuvenating the peace process. The team pulled together a high-level panel that included Adeng Leek  (Executive Director of Women Empowerment Network),   Dr. Akok Madut (South Sudan academic), Dr. Salvator Nkeshimana (Coordinator of the East Africa Desk in the Political Affairs Peace and Security Department at the AU) and Professor Liu Haifang (respected scholar on China Africa relations based at the prestigious Peking University). The panel was moderated by Dr. Lina Benabdallah  who is an extensively published authority on China – Africa relations.

Thanks to the profile and reputation of these panellists, the webinar attracted the participation of close to 50 participants, including the Japanese Ambassador at the AU, a former Special Representative of 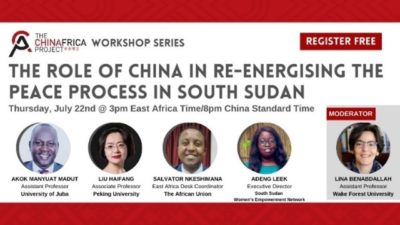 the Chinese Government on African affairs, representatives from the Chinese Embassy in Juba, the Secretariat of the Intergovernmental Authority on Development and officials from the African Union. The level of participants surprised those who have been researching and working on China, with a colleague at the China Africa Project having predicted prior to the event that “it would take ten years of working on this issue to secure participants” of the calibre that eventually attended.

Crisis Action also supported  the drafting and placing of an article in the East African by Ukach Farouk of the South Sudan Law Society calling on China to increase its support for the peace process. Crisis Action’s partner the China Africa Project did a podcast based on the webinar, which has been streamed and downloaded over 3,000 times, with about 400 downloads from within China.