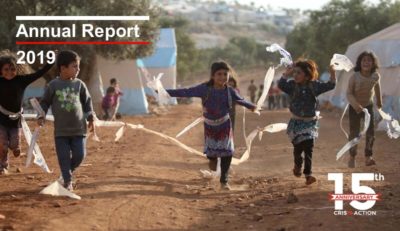 "The Trump administration is moving to sell another cache of munitions to Saudi Arabia...a step that would again de… twitter.com/i/web/status/1…

“Our collaboration with Crisis Action helped us expose the bribery and money laundering that fuels the conflict in South Sudan, and the role neighboring countries have played in siphoning resources out of the country. This work ignited conversations about illicit financial flows at national and regional levels and occasioned real consequences for some of the politicians responsible”. – John Allan Namu.

The conflict that broke out in South Sudan in December 2013 and is estimated to have claimed over 400,000 lives entered its sixth year at the end of 2019. While the humanitarian situation remains dire with over 1.47 million internally displaced and 2.2 million South Sudanese forced to seek refuge in neighboring countries, a political breakthrough has provided reason for cautious optimism. As a result of sustained pressure from regional and international actors, South Sudan’s leaders reached an eleventh-hour compromise to form a unity government on February 22, 2020.

Since 2013, Crisis Action together with partners have been working to secure a lasting peace in South Sudan. Efforts to this end have included building the capacity of South Sudanese civil society and coordinating global civil society efforts to ensure sustained regional and international pressure on parties to the conflict. These led to significant political breakthrough that led to the signing of the Revitalized Agreement on the Resolution of the conflict in South Sudan (R-ARCSS) in September 2018.

In this regard some of the highlights of our joint advocacy work with partners include:

The role of civil society in advocating for sustained regional and international engagement will remain key to ensure that the revitalized peace agreement is fully implemented.