The crisis in the Sahel continued to unravel. The United Nations Secretary-General referred to the region as “a microcosm of cascading global risks converging in one region.” The August military coup in Mali sparked renewed urgency and attention to the deteriorating situation. The impact of climate change on those displaced by the conflict has brought even more vulnerability to the populations in desperate need, with the UN declaring parts of the region as “one step short of famine.” For Crisis Action, the last three months have been a period of consolidating local partner relations while gathering data for the first shadow report on the People’s Pillars, due to be launched in early 2021. 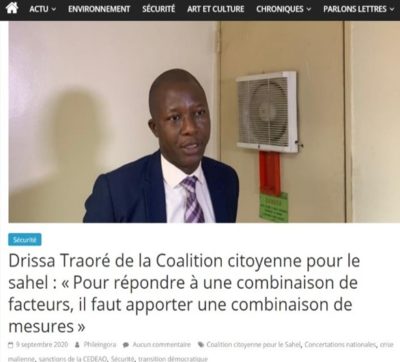 In the days following the August military coup in Mali, Crisis Action coordinate a joint statement signed by 28 local, regional and international NGOs. The statement framed the political crisis in Mali as a wake-up call th

at demonstrates the need for a shift of approach, and reiterated that the prioritization of a military response to the complex crisis has failed to protect civilians from atrocities, to prevent further instability, or to alleviate inter-communal grievances.

The statement – shared by partners on social media and distributed widely to journalists and policymakers – was received positively by key stakeholders including the UK Minister for Africa James Duddridge who, in a detailed letter to Crisis Action, expressed agreement with the sentiments in the statement and with the People’s Coalition’s focus on tackling the root causes of instability. He further welcomed the formation of the People’s Coalition for the Sahel noting “it is excellent to see the People’s Coalition also championing access, protection and human rights” and expressed his desire to meet with CEOs from Crisis Action’s network to discuss the change required to improve the humanitarian response in the region.

One outcome of our role in establishing the Sahel People’s Coalition is that Crisis Action is positioned as a bridge-builder between policymakers and NGOs working in the region. Crisis Action has been able to secure several key opportunities for dialogue between NGOs – the Sahel People’s Coalition – and policymakers as follows:

Crisis Action is working with partners to establish a mechanism for monitoring and holding key stakeholders to account for integrating and prioritizing civilian protection needs laid out in the four pillars. Partners are developing the report planned for early 2021.