In this month’s update, the latest news from our emergency response campaign on Ukraine, our core campaigns on The Sahel, Yemen and Ethiopia, and from our strategic engagement work on Syria.

Fostering solidarity and dialogue through art

Together with partners Desmond and Leah Tutu Legacy Foundation (DLTLF), the Ukrainian South African Association and the Centre for the Study of Violent Conflict (CSVR), Crisis Action supported a landmark art exhibition, the Womanly Face of War, by the Ukrainian Sunseed Art Project. At an in-person launch event in Johannesburg, over 40 participants – including activists, journalists, artists and influencers – engaged in an emotive dialogue on the impact of conflict on women and girls, featuring Ukrainian artist Olesya Drashkaba, Ukrainian activist Nataliya Popovych, DLTLF CEO Janet Jobson, and South African activist Annah Moyo, CSVR Executive Director. Alongside many who watched online, participants were also moved by live poetry by South African poet Mandisa Vundla, as well the powerful personal testimony of four Ukrainian women artists in a short video, which brought tears to several attendees. 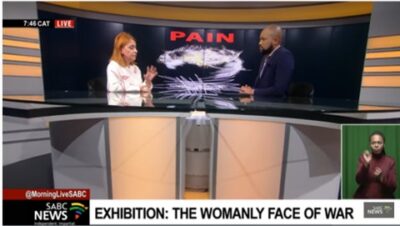 Exhibition creator Olesya Drashkaba was interviewed on the Saturday morning show of South Africa’s leading news channel, SABC, and the art exhibition was covered in-depth by journalists who witnessed the launch. Sunseed co-founder Nataliya Popovych’s voice was amplified by an op-ed and major feature story. News about the exhibition launch and webinar dialogue disseminated by partners on social media has been seen nearly 3.5 million times on Twitter.

Spurring high-level dialogue on peace and justice for Ukraine

In partnership with the DLTLF and leading South African newspaper The Mail & Guardian, Crisis Action supported a high-level, well-attended “Just Peace for Ukraine” webinar. Over 70 participants tuned in to watch the inspiring 2-hour dialogue and engage in the discussion. 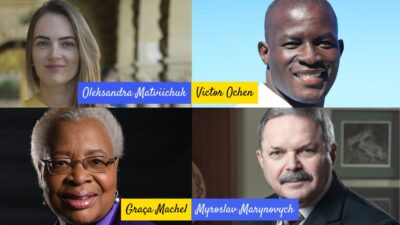 The panel – which included Graça Machel, Deputy Chair of The Elders; Miroslav Marynovych, a founding member of Amnesty International Ukraine; and other leading African and Ukrainian civil society activists – discussed African and Ukrainian perspectives on a just peace for Ukraine and issued powerful calls for solidarity to help end the war and ensure peace and justice. As Janet Jobson, CEO of DLTLF said, ‘’We can start to imagine a global movement of solidarity made up of people, not just states, and that can be uniquely Africa’s contribution in the context of ambivalence from our governments … . The people of Africa have a powerful voice that can be heard globally.’’

Rallying US support for peace and accountability

In July, we coordinated a US advocacy tour for Abdulrasheed Faqih, CEO of our Yemeni partner Mwatana for Human Rights, to bolster support for a UN mechanism that will deliver accountability for abuses and violations of international law in Yemen. Such a mechanism is considered by a broad coalition of partners including Amnesty International, Human Rights Watch, Save the Children, and the Global Coalition for the Responsibility to Protect, to be essential if a lasting peace is to be achieved.

The tour involved securing, and briefing Abdulrasheed for, meetings with influential policymakers including Senator Bernie Sanders, Deputy Assistant Secretary of State for Human Rights Christopher Le Mon, US Yemen Special Envoy Tim Lenderking, and three Representatives – Ilhan Omar, Ted Deutch and Tom Malinowski – all of whom committed to pushing recommendations for US action on accountability with the Biden administration as a result of the meetings. To draw further attention to the accountability issue, we arranged for the tour to be covered by influential Washington DC reporter, Stephanie Kirchgaessner, for The Guardian, and filmed by award-winning documentary maker Sonia Kennebeck, as part of a film profiling Mwatana to be released in the coming months.

Also in July, we partnered with the Cairo Institute for Human Rights Studies (CIHRS) to design and convene a workshop for 20 Yemeni civil society organisations to support them in exploring opportunities to campaign for ‘locally owned, globally led accountability in Yemen’. The workshop examined the different obstacles to accountability, drew lessons from the successful campaign by Syrian partners (supported by Crisis Action) for an accountability mechanism for Syria, and sought to identify and support the Yemeni partners most interested in leading future campaign work on this issue. Over 90% of workshop attendees reported a ‘higher level of interest and readiness’ to collaborate on future campaigns for accountability and justice – essential components if the current truce is to endure as a lasting peace.

Strengthening the role of Yemeni CSOs in the peace process

In July, we secured commitment from senior officials from the Office of the UN Special Envoy to Yemen (OSE) to meet with an expanded coalition of Yemeni civil society organisations as part of future peace negotiations. Crisis Action will now facilitate three consultation sessions between Yemeni CSOs and the OSE, ahead of an official meeting with Special Envoy Hans Grunberg in September. Building on the US advocacy tour and civil society workshop tactics covered above, this meeting will provide further opportunities for Yemeni partners to raise the vital issues of justice and accountability in peace negotiations at the highest level.

Increasing pressure for change with a milestone progress report

In the face of deteriorating security in the Sahel, Crisis Action worked with the People’s Coalition for the Sahel – the broad coalition of Sahelian and international partners forged by Crisis Action in 2020 – to produce and launch the report “The Sahel: What Has Changed”, reviewing progress a year on from the landmark roadmap for peace outlined in the Coalition’s first report of 2021.

To publicise the report, we brought together – online and at an in-person launch event in Dakar – more than 250 partners, civil society representatives, decision-makers (including from the governments of Burkina Faso and Niger) and media, securing coverage in Senegalese flagship news programme TFM, the BBC, Voice of America, TV5 Monde, and Radio France Internationale. Djimé Adoum, High Representative of the intergovernmental International Coalition for the Sahel remarked that the report “inspires us to do more, and helps us to better target the knots that need to be addressed.”

The launch of the “The Sahel: What Has Changed” report (detailed above) followed an intense three-day People’s Coalition strategy workshop in Dakar, designed and convened by Crisis Action with partners AfrikaJom and WATHI, with additional support from an array of international partners. The workshop enabled the Coalition to develop a joint six-month strategy and action plan, incorporating advocacy with Sahelian governments alongside a series of national events to publicise the report and its recommendations. Owing to the fact that the Covid pandemic was at its height when Crisis Action first proposed and generated the People’s Coalition in 2020, the workshop was the first time that member organisations from across the Sahel had been brought together in person. As one local partner commented, “this wonderfully-organised meeting will be crucial to the future of this coalition.”  The meeting in person both affirmed the value of strengthened interaction among coalition members but also underscored the scale of the achievement of building the coalition amid the Covid pandemic when such interaction was not possible.

Following a special invitation by the Brazilian delegation to the UN Security Council, we supported campaign partner Rabia Djibo Magagi of the Alliance for Peace and Security (Niger) to brief the Council on the issues of ‘women, peace and security’ in the Sahel.

The result of joint work between Crisis Action and local partners, this intervention represented a vital opportunity to promote People’s Coalition recommendations at the highest level. It also testified to the growing influence of Sahelian civil society on global decision-making, which has been a key objective for Crisis Action and partners in our campaigning on the Sahel.

Ms. Djibo Magagi has since been invited to a series of follow-up meetings with government officials, where Crisis Action will again support her to push for the adoption of People’s Coalition recommendations on greater peace, protection and accountability for crimes in the Sahel.

Building a campaign strategy for peace and national dialogue

After extensive consultations with numerous organizations and individuals to determine how a Crisis Action-coordinated campaign might add value and impact, we have produced a joint campaign strategy for Ethiopia with the support of partners. The campaign will take advantage of the prohibitive cost of the war on the main belligerents – the Ethiopian government and the Tigrayan People’s Liberation Front – and leverage war-weariness into a willingness for peace talks and an eventual national dialogue.

The proposed strategy will focus on two objectives: (1) supporting the AU-led political peace process and (2) role-modelling a grassroots peace and reconciliation framework led by religious actors and supported by community leaders (women, youth and elders). The strategy aims to reduce if not stop community level violence and spur reconciliation across communities, ultimately feeding into the national peace process.

The rationale behind our strategy is being further tested with experts, civil society and religious organizations.

Calling for accountability and truth about Syria’s missing persons

At the VI Brussels Conference on Syria, Crisis Action supported Syrian partners in calling for renewed international efforts to uncover the fate of detainees and missing persons in Syria. We convened and moderated a side event – “No Peace without Justice: The need for Accountability in Syria” – at which partners from the Caesar Families’ Association, Ta’afi Initiative, Syrian Network for Human Rights and the Heinrich Boell Stiftung called for justice for the families and hundreds of thousands of victims still languishing behind bars or disappeared, 11 years after this conflict broke out. Over 150 partners, policymakers, civil society and media representatives heard the panelists reflect on the ongoing  ‘culture of impunity’, the parallels with Ukraine, and what the international community must do to renew efforts for both accountability and humanitarian outcomes for families. Crisis Action then facilitated a private meeting for Syrian partners to put concrete proposals before a group of Political and Security Committee (PSC) Ambassadors at a breakfast hosted by Germany on the first day of the Conference.

Good news arrived in late August when UN Secretary-General António Guterres released a report on Missing Persons in Syria. It calls for the creation of a new international mechanism to clarify the fate and whereabouts of missing persons in Syria and provide support to victims, survivors and families including through the establishment of a trust fund. We are now consulting with partners to see how we can turn the recommendation into a reality.

Following requests from Syrian and INGO partners, Crisis Action’s UN Office engaged in a number of initiatives to help secure the adoption of the UN humanitarian cross-border resolution before the July 2022 deadline, ensuring that the lives of 4 million civilians in North West Syria were not severely impacted by an end to cross-border assistance. 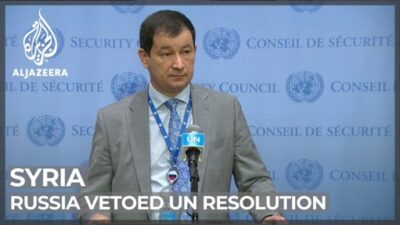 To complement existing efforts among Syrian and international humanitarian and human rights NGOs, Crisis Action supported partners to engage jointly with representatives of the Turkish mission to the UN  to communicate shared messages on the necessity for a 12-month renewal and received assurances that Türkiye was communicating these positions with key states at the highest level.

Crisis Action also supported Syrian partners to  engage the media on the importance of the renewal, including supporting an op-ed by Waad Al Kateab (Action for Sama) in Indian media, calling on India to support renewal as a UNSC member. India this year joined the elected-member consensus in support of renewal.

Though Russia vetoed the first UN Security Council resolution to extend cross-border assistance for 12 months, a compromise resolution was adopted on 12 July extending the delivery of humanitarian aid into Syria’s north-west for six months, leaving the door open for a subsequent six-month renewal until 10 July 2023.