As the war in Syria nears 10 years, the conflict is far from over as demonstrated by escalating violence in northeast Syria in January. The economic crisis has been exacerbated by COVID-19 and sanctions. Despite the dire situation on the ground, the Syrian government is still pursuing the “normalisation” phase backed by Russia, while the Syria Constitutional Committee meeting in Geneva in January did not make any progress. There is a strong opportunity to make it clear to Russia that there will be no stability, no long-lasting peace, no returns, and therefore no “exit plan” if the root causes of the conflict are not addressed. 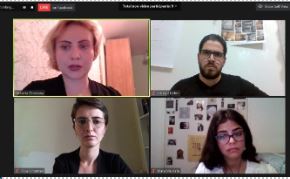 Crisis Action continues to expand the narrative in Russia on Russia’s role in the Syrian conflict. In November, Crisis Action partnered with the Moscow Helsinki Group to bring together 40 Syrian and Russian activists based in 11 different countries in an online event (with English translation here) to challenge Russia’s domestic narrative on the fate of detainees in Syria. This was the first time our Syrian partners were engaging a Russian audience. Olga Bobrova from the independent Novaya Gazeta said that: “The Russian Federation is talking about how the war in Syria should end but it does not talk about all the violations the Russian government is helping to commit in Syria… The Russian audience needs to hear what is happening in Syria… As a Russian journalist, I must say what is happening.” While pro-Russian media outlets are pushing the international community to normalise relations with Assad, Crisis Action has built and expanded its contacts inside Russia and managed to increasingly spread the true story about Russia’s actions in Syria.

Crisis Action continues to enhance the advocacy skills and capacity of Syrian partners and activists and this time, the focus of the training was on helping partners better use social media for impactful advocacy e.g. Facebook/Twitter/Instagram. These sessions are aimed at strengthening Syrian civil society’s expertise to engage independently in campaigning and advocacy. One of the participants said the training was “enlightening in many ways.”