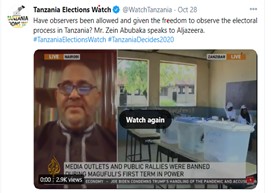 In the run-up to the October elections, Tanzania was marred with state-sponsored violence, with opposition leaders victimized, civil society and journalists barred from doing their work, and fear of post-election violence rife. Ahead of the elections, Crisis Action mobilized a coalition – including Tanzania’s Centre for Strategic Litigation, the Kenya Human Rights Commission, Kituo Cha Katiba in Uganda and the Tanzania Elections Watch and the Open Society Foundation – that helped to secure some important milestones to prevent further violence in the country. As a result of this campaign, days before the election, Tanzania’s National Election Commission swore in agents of opposition candidates, when they had previously refused to do so, and the UN Secretary General and African Union (AU) Commission Chairperson issued statements calling for peaceful elections, alerting President Magufuli that the world is watching. Crisis Action coordinated the campaign by:

President Magufuli was declared winner of the elections by the Tanzania National Election Commission despite documented evidence of massive irregularities. A preliminary report our partners publicized has gained traction, leading to calls by international actors led by the US and the UK to investigate these allegations. The pressure on President Magufuli has meant that he has not unleashed violence against civilians as had been feared. Further to this, opposition leaders who had been arrested after calling for mass protests to challenge the outcome were released following pressure from envoys from the US, UK, Germany and Canada. We are proceeding to exit the emergency response as we judge that the aim of averting post-election violence has been met