Fighting continues in Yemen as the different sides of the conflict are making concerted pushes for territorial gain. On the one hand this puts the December 2018 Stockholm agreement under threat, while on the other hand the agreement received a major boost after the Hadi government and Houthis implemented a major prisoner swap. The humanitarian funding shortfall continues to threaten millions of vulnerable people whose desperate need of aid is exacerbated by COVID-19. A ceasefire and start to peace talks remain elusive.

Crisis Action’s focus has been to push for effective measures to hold perpetrators of grave violations accountable while also seeking to secure increased humanitarian funding and pushing for the release of all arbitrarily detained civilians, including journalists and activists, and for the fate of the forcibly disappeared to be revealed. 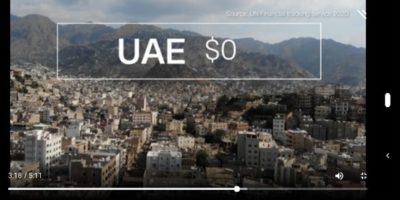 In September, Crisis Action helped secure over USD 200M in funding from Saudi Arabia and Kuwait for the UN’s humanitarian response in Yemen, evading aid program cuts that would have affected millions of Yemeni civilians. In July, top UN officials sounded the alarm over a shortfall of over USD 1 billion, owing mainly to Saudia Arabia, the United Arab Emirates (UAE) and Kuwait. If unaddressed, the 2020 UN Yemen aid response would require suspending dozens of life-saving programs, even as Yemenis struggle with COVID-19 and a rising famine risk. The UN’s senior Yemen humanitarian official asked Crisis Action to help galvanize international pressure to close this humanitarian funding gap.

Elbagir called Crisis Action’s support for her “absolute key” to “the reporting that made up the backbone of our investigation.” A senior UN humanitarian official told Crisis Action the CNN story “does what we need most – draws a lot of attention to the lack of funding. Bravo!” A senior European diplomat called CNN’s reporting “truly excellent” and thought it would “save lives.” The UN Humanitarian coordination in Yemen, Lise Grande, said “I, and many others, truly believe that the collaboration between the UN, NGOs and your exceptional teams .. have changed the course of the war in Yemen. What you have done in mobilizing debate on Yemen, and impacting the position of the countries and actors which perpetuate it is nothing short of miraculous. In 25 years, I have never worked with more effective advocates, never. Millions of people in Yemen owe their lives to them.”

It’s still a long way to go. To date, the Yemen Humanitarian Response Plan is only 42% funded – the lowest-ever level so late in the year. Despite the additional humanitarian funding we helped secure, other donors such as the UAE need to step up their contributions.

In early October, the UN Human Rights Council (HRC) voted to renew and strengthen the mandate of the Group of Eminent Experts on Yemen (GEE) for another year. While previously its mandate was focusing on reporting human rights violations, the GEE will now also be able to collect and analyze evidence that could be instrumental in pursuing accountability for war crimes in Yemen. These were the exact recommendations called for by a global NGO coalition Crisis Action built ahead of the vote. 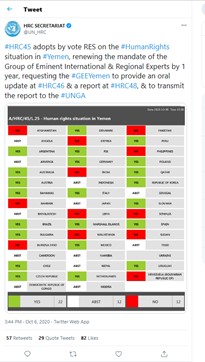 The GEE was created in 2017 following a campaign coordinated by Crisis Action. Its annual reports have exposed ongoing human rights violations by all warring parties, which has led to fierce annual opposition to the mandate’s renewal by Saudi Arabia and the United Arab Emirates. Aware of this opposition, early this year, Crisis Action built a coalition of over 20 Yemeni, regional and international NGOs to work together and was able to facilitate the coalition to effectively co-strategize with the GEE and traditional government champions of human rights in Yemen to drive the resolution to success. We also enabled 17 members of the coalition to send a private letter to the core group of governments leading the UN Human Rights Council’s work on Yemen. Crisis Action supported civil society to synchronize both public and private messaging around the reasons for renewing and strengthening the GEE’s mandate. We also coordinated information-sharing among NGO partners, maximizing advocacy efforts and avoiding duplicative efforts.

A senior staff member at Mwatana for Human Rights, one of the coalition members, said in response to the mandate’s renewal: “at the HRC, civil society chose years ago to work in partnership… and that choice (is) the major reason why civil society has been able to significantly influence, and in some cases drive, the conversation.” Another Yemeni partner involved in the coalition we coordinated called the campaign “truly a success story of joint efforts.” While the renewal and strengthening of the GEE mandate was a significant step in the path towards accountability, there is still a long way to go to help bring perpetrators of human rights violations to justice.

In mid-October, the Government of Yemen and the Houthis concluded the largest prisoner exchange to date, releasing 1,080 arbitrarily detained prisoners, including five journalists. The release of unjustly held prisoners is an important part of the 2018 Stockholm peace agreement, which had stalled since then. 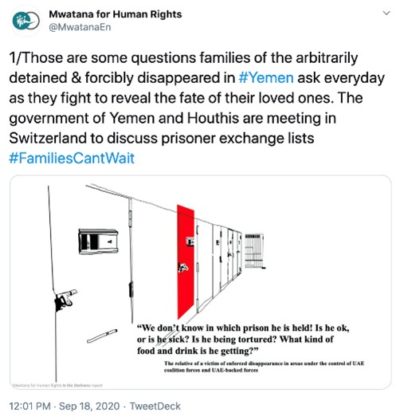 Crisis Action supported partners to mount public pressure on the warring parties to release the innocent prisoners. Crisis Action coordinated a coalition of Yemeni and international NGOs comprising Mwatana for Human Rights, Human Rights Watch, Amnesty International, Committee to Protect Journalists, Mothers of Abductees Association, Cairo Institute for Human Rights, International Federation for Human Rights and the Yemeni Journalists Syndicate. The Crisis Action-led coalition released a joint statement urging all parties to release those arbitrarily detained. We designed a social media campaign working with an artist that our partner Mwatana used in a report on unofficial detention centers in Yemen. The joint statement was picked up by more than a dozen media outlets, including the New Arab, Belqees TV, Al-Monitor, L’Orient Le-Jour and ReliefWeb, and we heard directly from the Office of the UN Special Envoy for Yemen, Martin Griffiths, that the campaign was “great and so timely,” given the Switzerland talks that were taking place between the warring parties at that time. The UN Special Envoy further said that it was “an important day for over a thousand families who can expect to welcome back their loved ones hopefully very soon”.