What is the specific change we need to see?

Imagine a country’s Olympics team getting all mixed up. The swimmers end up in the sprint and the cyclists are handed javelins. There’s a wrestler on a horse and a gymnast with a tennis racket. It might look funny, but it doesn’t work: the special expertise of each athlete is being wasted, so the whole team fails.

The same applies to organising for impact: each individual or organisation you’re working with brings something special to the coalition, but each one of them will not be able to support in every area. In recognising and engaging with that diversity we can find immense power.

Step 1: Opting in and Buying in

The first step in building clever coalitions is to engage with potential coalition members around the question ‘what is the specific change we need to see?’ There may not be universal agreement on this. That is ok. What you are seeking is a critical mass of coalition members that agree on what success looks like.

Too often, traditional coalitions sacrifice their power in the pursuit of consensus. In too many cases trying to get everyone to agree produces one of two results; either:

As the coalition convenor, your role is not to seek universal agreement or even to minimise disagreement; you are seeking active commitment to bringing about a specific change.

Organisations don’t opt out; they opt in. This is a crucial principle of clever coalition building. Opting in brings so much more power to the coalition than trying to minimise the number of organisations opting out.

As long as there is a critical mass – a committed group of sufficient talents to make a difference and who share a vision for what needs to change – you can move forward. 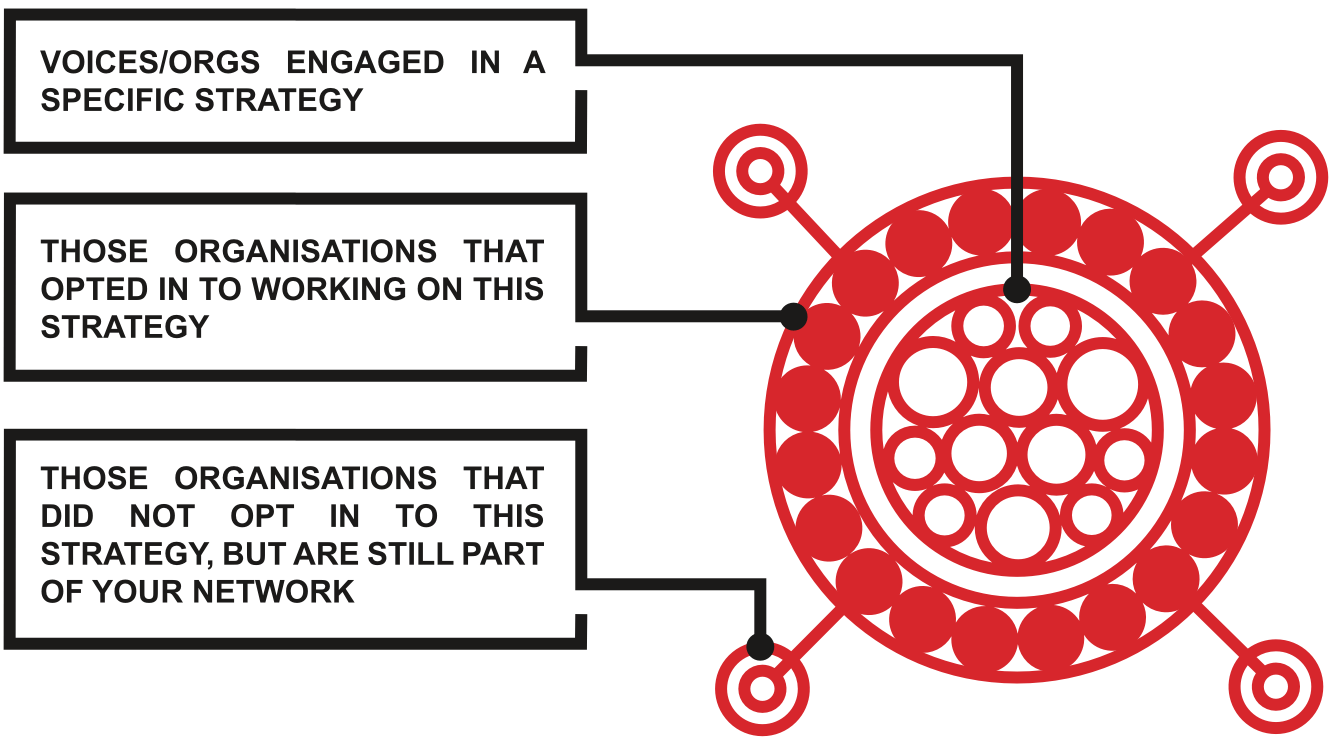 The next step is to develop the strongest strategy for how the collective can achieve that change. It will almost never be the case that the solution to a social justice problem will be simply: ‘organisation X can fix it’, no matter how powerful organisation X is. The problems we’re dealing with are far more complex than that. So the organising principle at this stage is not ‘what can I do?’ but: ‘who can make this change happen?’

You will get a far stronger answer to this question – and so a much more powerful strategy – by crowdsourcing contributions. Key elements to the strategy are:

All these elements of your strategy will be more robust when enriched by the inputs from the diversity of partners: activists, affected communities, analysts, researchers, media experts, creatives – each of them bringing their own particular expertise to serve the cause.

The third step in this component rests on the premise that, for the greatest impact, the right expertise needs to be applied strategically, where it can maximally contribute to the overall goal.

Think back to the Olympics analogy where the hurdlers are hurdling and the canoeists are canoeing: the solution may well not be for every member of the coalition to take part in every activity.

Again, the opt-in principle applies. If the theory of change says that the Minister will change her mind if she hears that the current policy is bad for national security, then you will need to build a bespoke tactical coalition of people with credibility on security matters. If the power analysis shows that the legislator is seeking to sure up her credentials as a voice of workers, then build a tactic that labour unions can opt into.

Sometimes the ‘coalition’ for one tactic may be 100 organisations; sometimes it will be one person voicing a particularly powerful story – either way, your role is to make sure all talents are allocated where they can best serve the change the coalition is seeking.

This process of strategising and seeding new coalitions never stops. A further strength of clever coalitions is they repeatedly crowdsource information and intelligence around a specific social problem. Based on this evolving analysis, you can adapt your theories of change and the composition of the coalitions to give the best chance of achieving the shared objective even as the situation changes.