Following the launch this year of the landmark ‘Milestone Report’ by the People’s Coalition for the Sahel, Crisis Action has focused on evaluating its work to date, consulting partners on the strategy for the next chapter of work, striving to align where best to prioritise amid many options, and seizing specific opportunities to support partners’ advocacy on the Milestone report’s recommendations. Crisis Action also played a key role in focusing international attention to head off the prospect of a Russian mercenary group further expanding its operations into Mali – a desperate development for the people of Mali and a threat to UN peacekeeping and operations.

Exposing a deal between Russian mercenaries and Malian authorities 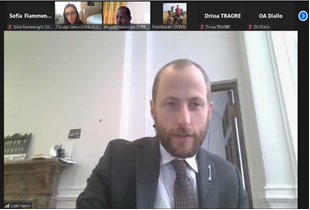 In September, thanks to information and advice on sources provided by Crisis Action, a Reuters investigation exposed a deal between the Malian junta with Russian mercenary company Wagner. The exposé triggered strong warnings to Mali by France, Germany, the EU, the UK, Niger, the US, ECOWAS and Cote d’Ivoire, that their security assistance to the region would be incompatible with the presence of mercenaries. This was all the more important given Crisis Action’s partners’ hesitancy to speak out about the risks to civilians from deploying private military contractors fearing threats to their operations.

Seven months on from its launch, the People’s Coalition report The Sahel: What needs to change has firmly established the Coalition as a primary civil society interlocutor with government decision-makers both within the Sahel region and in the international community; in France, the AU, Germany, the EU and the UK.

Crisis Action organised the People’s Coalition’s first meetings with the UK Sahel envoy, the Sahel Alliance (comprised of key donor countries), the African Union Mission for Mali and the Sahel, and officials in the Nigerien government, while securing opportunities for partners to sustain pressure on France via meetings with key advisors to French President Macron – his right-hand Africa advisor and France’s Sahel Envoy – as well as African Union officials and Addis based diplomats. Among the results from these meetings: